Key readings on employment showed mixed results as ADP payrolls decreased to 182,000 from September’s downwardly revised reading of 190,000 private sector jobs added. U.S. jobs expanded to a reading of 271,000 jobs added in October, which exceeded expectations of 180,000 jobs added and September’s reading of 137,000 jobs added. This was the fastest pace for job growth in 2015 and fueled expectations that the Federal Reserve may raise interest rates in December. In addition, the national unemployment rate dropped to 5.00 percent in October, which was the lowest unemployment rate in seven years.

In testimony before The House Financial Committee, Federal Reserve Chair Janet Yellen said that the central bank’s objective was to regulate financial institutions “in a manner that promotes the stability of the financial system as a whole.” This indicates that the Federal seeks to prevent threats to major financial institutions that could result in a repeat of the great recession in 2008.

Chair Yellen also said that the Federal Reserve Board and the FDIC have written a rule requiring the largest financial institutions to show that any financial failure could be “resolved in an orderly manner through the bankruptcy court.” These comments suggest that the Federal Reserve has ongoing concerns about the stability of the largest financial institutions and the economy; this could cause the Fed to take a wait-and-see attitude on raising interest rates in December. The Fed is expected to address interest rates in its December meeting of the Federal Open Market Committee, which directs monetary policy for the Fed. 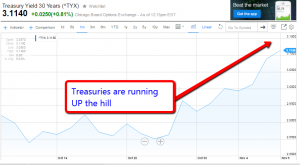 Next week’s scheduled releases for economic reports are slim; no reports are scheduled for Monday and Tuesday markets are closed for the Veterans Day holiday. Freddie Mac will release mortgage rates on Thursday and the weekly Jobless Claims report will also be released. Other scheduled reports include retail sales, retail sales except automotive sector and the University of Michigan’s report on consumer sentiment.

What’s Ahead For Mortgage Rates This Week – December 5, 2022

Understanding ‘PITI’ and What Goes in to Your Monthly Payments

What Are The Different Types Of Investment Properties You Can Purchase?